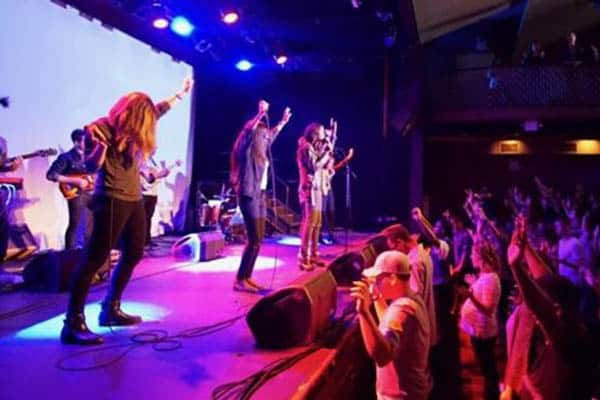 Last week we looked at a bunch of dead or older and dying out name it and claim it, word of faith, health, wealth and prosperity preachers who claim sending them money is a seed of faith that God will return to you up to a thousand fold. To hear them tell it sending them money is the same as sending it directly to God in heaven. Yes, there some younger ones who are using these old lies, but young people have not been fooled for the most part by these guys. It is mostly older folks who follow those charlatans.

But young people, while they were wise to the ways of the money grubbing, health wealth and prosperity, name it and claim it, positive confession, hyper faith charlatans, they have been hoodwinked by a new wave of preacher.

Churches have become blacked-out meeting places with no altar but a stage, rock concert type light show,  smoke machines and pop/rock music so loud earplugs are passed out by ushers as one enters. Sermons have been replaced by feel good stories with only a verse or two of Scripture and many illustrations that build self esteem highlighted by skits, plays, and dancing flag bearers.

Many of these new “churches” often offer expensive STARBUCKS type coffee drinks for sale in their own coffee shops, have multiple big flat screen TVs showing all the “Sunday Ticket” NFL games in the entry , while booming speakers blare with songs like Steppenwolf’s “Born to be Wild.” Some have workout gyms that would make Bally’s jealous, bookstores, and some even have a bowling alley!

Perhaps you have heard of an Instagram account called PreachersNSneakers? It is an account that blew up the internet posting pictures of famous hipster pastors in expensive designer clothes and shoes. “Preachers In Sneakers” is also the title of a book by Ben Kirby. It is a book I couldn’t put down and I highly recommend it.

Hillsong Music is the medium used to promote the Hillsong brand, a multi million dollar cult based in Australia. The Australian leader, Brian Houston, has been removed for many moral lapses. The best known leader in the US was Carl Lentz, the pastor of Hillsong NYC in Manhattan, once attended by stars Justin Bieber, Kevin Durant and Selena Gomez to name a few. Lentz recently also had to be removed for horrendous moral failures.

Jesus Culture music is the front band for Bethel “Church” of Redding, California, another cult that controls and closely monitors the lives of students who pay thousands of dollars in tuition to supposedly learn to do miracles.

Steven Furtick is the epitome of all this and the vision casting leader of a personality cult known as Elevation Church and a rock star. He has his own coloring book for kids in his “church” to color portraying him as a kind of super hero. Elevation music is produced by yet another group of folks from Elevation Church with a lot of talent but no sound theology.

Do Hillsong, Elevation, Jesus Culture write any good songs? Yes, they certainly do. They are all very talented and good with lyrics and music and now and then they actually write something worth singing that isn’t off theologically.

Most folks don’t have a clue about the horrible theology and bad doctrine associated with the churches these groups represent. They just like the pretty music. The problem is that buying and using their songs in church or crediting them in any way promotes their false religion.

Where did this stuff come from and how did it enter the church? Well, you can trace it back to a businessman named Peter Drucker. Drucker had two very famous students named Rick Warren and Bill Hybels.

Rick Warren, the Purpose Driven pastor of Saddleback Church and Bill Hybels  former head of the Willow Creek Association were two of the most influential organizations within evangelical Christianity. Hybels has also been removed from leadership because of moral failures. Did these men become so influential within Evangelical Christianity because they were following the commandments of Jesus or because they were (or in the case of Rick Warren, is still following) the best business management practices of Peter Drucker?

“Within the pages of The Essential Drucker by Peter Drucker, we read about how Bill Hybels utilized Drucker’s business practices to design a “church” that catered to the “customers’ needs.” It says:

“Willowcreek Community Church in South Barrington, Illinois, outside Chicago, has become the nation’s largest church. . . Bill Hybels, in his early twenties when he founded the church, chose the community because it had relatively few churchgoers, though the population was growing fast and churches were plentiful. He went from door to door asking ‘Why don’t you go to church?’ Then he designed a church to answer the potential customers’ needs: for instance it offers full services on Wednesday evenings because many working parents need Sunday to spend with their children.”

Peter Drucker was a non believing business man was the father of the seeker friendly apostasy where people are treated as customers and the church like a business and the number of people you can get to come inside the building is how you count success.

Don’t bother looking at the Bible or what Jesus said the church should be and do, just do whatever it takes to draw a crowd and bring in a bunch of people.

“Warren (Rick) also says that his staff at Saddleback reads and discusses Drucker’s writings, using them to manage the church. In Rick Warren’s office is a print signed by Drucker and given to Warren that reads: “What is our business? Who is our customer? What does the customer consider value?”But what does God value? This type of Druckerian language clearly reveals that Saddleback Church is a business with customers made to look like a church of Christians. Drucker said, “The purpose of management for churches is not to make them more business-like, but to make them more church-like.”

“Borrowing Warren’s example, the Druckerites Bob Buford, Bill Hybels and Rick Warren are like the franchises Burger King, Wendy’s and McDonalds. Just as all of those fast-food restaurants sell hamburgers, so the Druckerites all sell knowledge-based products to build churches. Though the different brands of hamburgers taste different and come with different toppings, they are all hamburgers. In the same way, the Druckerites brand may vary, whether it be Leaderhip Network, Willow Creek or Purpose Driven, but they are all essentially the same in their implementation of best business practices for building the local church.”

Market strategy, business techniques, and studying demographics learned from a business leader named Drucker and a feel good message learned from the likes of Norman Vincent Peale and Robert Schuller combined to create the mega church growth, consumer, seeker friendly model used first by Rick Warren and Bill Hybels. But that was only the beginning.

Add some really professional pop rock bands, some stage lights and smoke with their own “Christian” lyrics that are known as  7-11 songs (7 words sung 11 times) some super cool hipster pastor and some feel good self esteem building talks with lots of stories and illustrations and little or no Bible and you have a recipe to grow a mega church just about anywhere with any real population at all. These churches are everywhere. They are miles and miles wide and about one inch deep spiritually.

A church is supposed to be for equipping the saints (the sheep) for Christian service, fellowship, hearing and studying the Bible, prayer and the Lord’s Supper. It has been turned into a night club to entertain the goats.

Thankfully here in the valley there are some real churches left that do not preach the seed faith nonsense. Nor do they exist to entertain. The Word of God is still preached verse by verse and book by book. Please take the time to find one of the good one