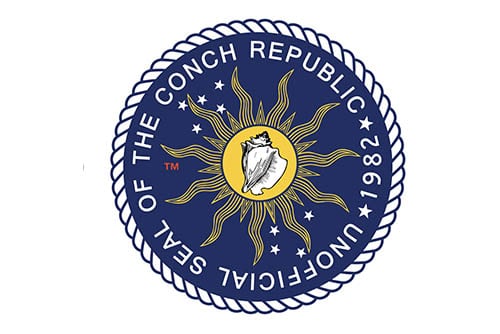 If you have never been to Key West, Florida you might not have heard of the United States’ second Civil War.

Believe it or not this really happened, but not quite on as grand a scale as the first civil war.

Actually, during the Reagan-Bush war on drugs in the early 1980’s, U.S. Route 1 from Key West to Miami was used heavily by drug traffickers. Then Vice President, George Bush, had police road blocks set up along U.S. 1 to stop the drug flow. This not only slowed the drug traffic, but also greatly slowed the tourist traffic as well.

In the past treasure hunting and pirating were sources of revenue for Key West, but once those were no longer viable professions in Key West the city came to rely heavily on tourism for their economy.

By early April of 1982 Bush’s roadblocks along the only road leading in and out of Key West had inadvertently pretty well destroyed Key West’s tourist-driven economy.

Something had to be done. The mayor and local authorities decided that drastic action was needed to make the Reagan administration aware of what their war on drugs was doing to Key West’s tourist trade and their economy. They came up with a rather unique approach inspired from an old Peter Sellers movie, “The Mouse That Roared.” ( a must see, I give it my highest rating–5 dittos!) They decided to form their own republic, succeed from the Union, declare war on the United States, immediately surrender and then request federal aid!

The Key West, Florida, city mayor took their declaration of independence and declaration of war documents to Washington D.C. No shots were ever fired, of course, but it did get the attention of Vice President Bush who promptly ended the road blocks. 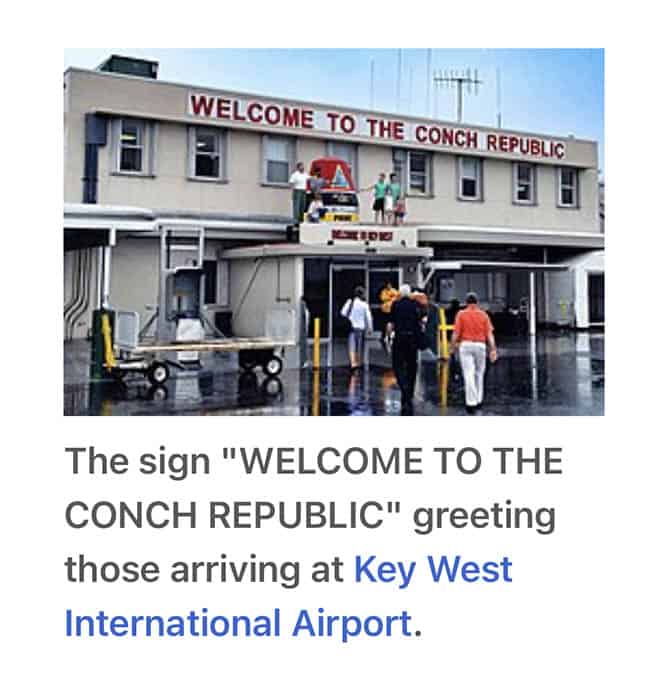 Every April 28th, since 1982 the people of Key West, Florida–population less than 25,000 celebrate their independence. We were there just days before the celebration once. We saw “Conch Republic” license plates, bumper stickers, magnets and t-shirts everywhere. It seemed to really please them to be asked what it all meant and they explained with great pride the story of their succession and independence from the U.S.

We took a trip to the Florida Keys, Marco Island and the Bahamas years ago. We spent four days in Freeport, Grand Bahama. It was a once in a lifetime experience. I had never realized how close the Bahamas are to Florida (about the same distance as Cuba) or how inexpensive it is to go there if you are in Florida already anyway.

I highly recommend a visit to the Bahamas for anyone going to Florida. It is only a 5-7 hour ride by cruise ship from either Miami or Ft. Lauderdale and well worth the trip. 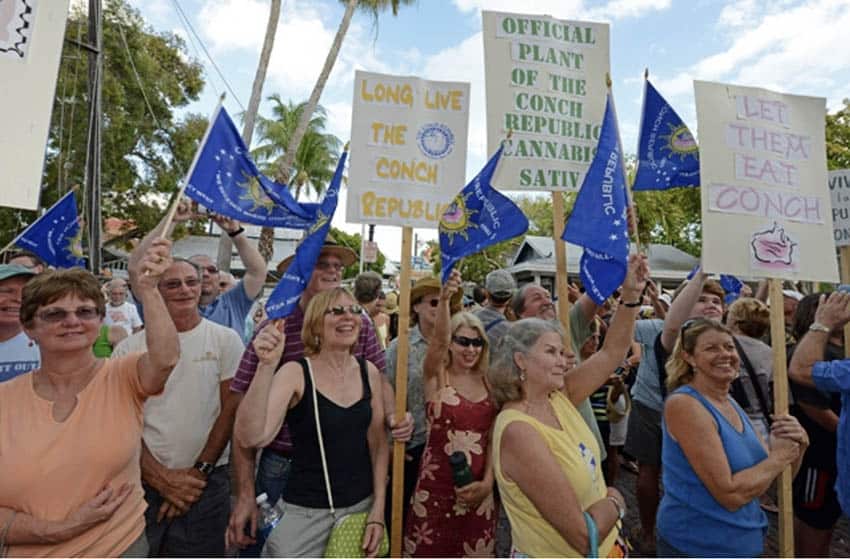 Americans are very welcome in the Bahamas. Many times as we walked through the straw markets they would call to me, “Hey big sweet mon, come over here.” ( I really am a big sweet mon!)

The Bahamian people are very laid back and seldom get in a hurry. The pace is much slower. One of their favorite expressions was, “No Problem Mon.”

Other differences that I noted between the Bahamian culture and ours were quite striking. Hardest to get used to is that they drive on the “wrong side of the road.” A welcome difference was that Bibles were seen everywhere. Taxi drivers had them on their dashboards. Shop owners would be seen reading well worn Bibles when they were not busy waiting on customers.

Gospel radio stations were played on the p.a. systems in many Bahamian shops. I did not sense any racial tension at all. It was so noticeably lacking that I asked a lady in one of the banks about it. Sylvie Carey, a loan officer at the Royal Bank of Canada in Freeport, said that they really do not have racial tension or gang problems. She volunteered that she (a white native of Canada) was married to a black Bahamian and that she had not experienced any prejudice.

Bahamians pay absolutely no taxes of any kind. No property taxes, no sales tax, no income tax etc. Wouldn’t that be nice? Their roads and so on are paid for by duties on imports. Some items, like milk for instance, are quite expensive. (About $4.50 per gallon when we were there. We didn’t see a single cow on Grand Bahama Island.)

Other items were priced very much like back home and some things were even cheaper. If we paid no taxes here I could handle paying $4.50 for milk– No Problem Mon.

Instead of the 10 most wanted on posters at the post office in Freeport there was only one poster and it was for a lost dog. Crime is not tolerated in the Bahamas. The C.I.D. (Criminal Investigation Dept.) is so feared that very few dare commit crimes in the Bahamas, according to Sylvie Carey.

One of the couples we were with left their expensive camera at a restaurant there. They were cying the blues to our cab driver the next day and he told them, “No problem mon, your camera will still be there.” He offered to take them there on the house if it wasn’t and it was!

Abortion is completely illegal in the Bahamas. Gambling exists on the island for tourists, but Bahamian natives who are not working there are forbidden to even enter the casinos unless they work there.

Public education is free to residents and their students score much higher on tests than ours do. My only complaint about our experience in the Bahamas was that taxi cabs are very expensive there. (Actually, probably no more expensive than here, but I rarely take taxis here!) I think it would have been cheaper to buy a small car than to take a taxi everywhere for four days.

We even asked one of the taxi drivers if he would mind telling us how much money he made. He said that on a normal week he made about $2,000.00, but on a busy week he could make $3,500.00. Not bad money especially when he doesn’t have to pay any taxes!

Viral YouTube Video of Crazy AZ Cop What is the Point of Going to Church?