“The strongest reason for the people to retain the right to keep and bear arms is, as a last resort, to protect themselves against tyranny in government.” ~ Thomas Jefferson

“Death, Taxes, and Democrats will always be with us, at least Death never gets any worse!” ~Anonymous

“Roses are red
Violets are blue
Most poems rhyme
But this one don’t.” ~ Anonymous

“To be prepared for War is one of the most effectual means of preserving peace.” ~ George Washington

“Dictatorship (n): a form of government under which evrything which is not prohibited is compulsory.”

Peasant: “What are you doing about the war on poverty?” King: “Nothing. Its over, and you lost!” ~ Anonymous

“Try to look unimportant; the enemy may be low on ammo and not want to waste a bullet on you!” ~ Murphy’s Laws of Combat Operations

“A sucking chest wound is nature’s way of telling you to slow down.” ~ Murphy’s Laws of Combat Operations

“Has anyone heard about the agnostic dislexic insomniac … who used to lay awake nights wondering if there really was a Dog?” ~ Mark Marikos

“When the government fears the People, that is Liberty. When the People fear the Government, that is tyranny”. ~ Thomas Jefferson

“Things don’t turn up in this world until somebody turns them up.” ~James A. Garfield

The four boxes of liberty is an idea that proposes: “There are four boxes to be used in the defense of liberty: soap, ballot, jury, and ammo. Please use in that order.” ~ Larry McDonald

“It is both possible and moral, to love one’s country and hate its government.” ~ Dr. Walter E. Williams

“If you can read this you weren’t aborted. Call your mom and thank her.” ~ Anonymous

“The most dangerous place in America for a child is it its mother’s womb.” ~ Anonymous

“In America every third baby dies from abortion.”

“Those who survived the San Francisco earthquake said, ‘Thank God I’m still alive.’ But, of course, those who died, their lives will never be the same again.” ~ former U.S. Senator Barbara Boxer:

“What a good thing Adam had–when he said a good thing, he knew nobody had said it before.”-~ Mark Twain

“Isn’t it something that the gold men will steal and die for here is just the asphalt we will walk on in heaven?” ~ Anonymous

“The Constitution may not be perfect, but it’s a lot better than what the government’s using these days.” ~ Anonymous

“Congress is thinking about eliminating a federal program under which scientists broadcast signals to Alien beings. This would be a large mistake. Alien beings have atomic blaster death cannons. You cannot cut off their federal programs as if they were merely poor people.”~ Dave Barry

“The democracy will cease to exist when you take away from those who are willing to work and give to those who would not.” ~ Thomas Jefferson

“There are three side effects of acid. Enchanced long term memory, decreased short term memory, and I forget the third.” ~ Timothy Leary

“A government which robs Peter to pay Paul can always depend on the support of Paul.” ~ George Bernard Shaw

“Middle of the Road: The spot where politicians pause when turning left.” ~ Unknownl

“Ninety-eight percent of the adults in this country are decent, hardworking, honest Americans. It’s the other lousy two percent that get all the publicity. But then, we elected them!” ~ Lily Tomlin

“The first thing you have to do is disarm the people. A disarmed public can’t fight back.” ~ Adolf Hitler

“Among the many misdeeds of the British rule in India, history will look upon the act of depriving a whole nation of arms as the blackest.” ~ Mahatma Gandhi

“Laws that forbid the carrying of arms…disarm only those who are neither inclined nor determined to commit crimes. Such laws make things worse for the assaulted and better for the assailants, they serve rather to encourage than to prevent homicides, for an unarmed man may be attacked with greater confidence than an armed man.” ~ Thomas Jefferson

“The beauty of the second amendment is that it will not be needed until they try to take it.” ~ Thomas Jefferson

“The price of liberty is eternal vigilance.” ~ Thomas Jefferson

No free man shall ever be debarred the use of arms.” ~Thomas Jefferson

“Firearms are second only to the Constitution in importance; they are the people’s liberty’s teeth.” ~ George Washington

John Adams also said, “Arms in the hands of citizens may be used at individual discretion…in private self-defense.” ~ John Adams

Police usually arrive just in time to draw a chalk outline around the victim. It’s up to you alone to make sure the outline isn’t drawn around you.

“The Bible is God’s love letter to His children . If you don’t understand it, it’s because you’re reading someone else’s mail.” ~ Adrian Rogers

“The only thing necessary for the triumph of evil is for good men to do nothing.” ―Edmund Burke

“Most people want to serve God, but only in an advisory capacity.” ~ Adrian Rogers 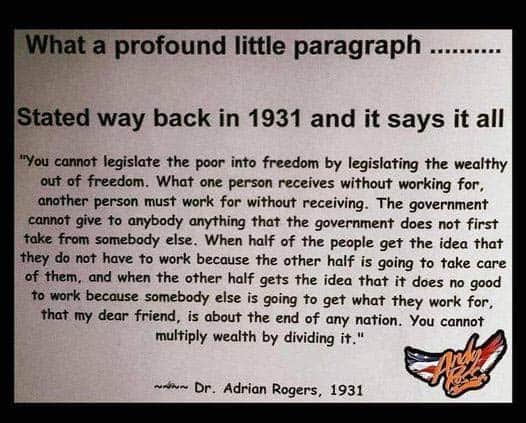 Is Jesus the Only Way to Heaven? World Famous Cars Made in Maricopa