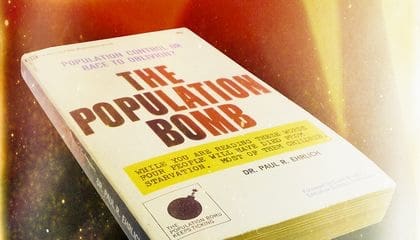 Not all that long ago a serious problem we were told we faced was overpopulation. In 1968 “The Population Bomb”  became a best-selling book written by Stanford University Professor Paul R. Ehrlich. It predicted worldwide famine in the 1970s and 1980s due to overpopulation, as well as other major societal upheavals, & advocated immediate action to limit population growth.

Fears of a “population explosion” existed in the 1950s and 1960s, but that single book and its author brought the idea to a much wider audience.

“As 1968 began, Paul Ehrlich was an entomologist (bug doctor) at Stanford University, known to his peers for his groundbreaking studies of the co-evolution of flowering plants and butterflies but almost unknown to the average person. That was about to change. In May, Ehrlich released a quickly written, cheaply bound paperback, ‘The Population Bomb.’ Initially it was ignored. But over time Ehrlich’s tract would sell millions of copies and turn its author into a celebrity. It would become one of the most influential books of the 20th century—and one of the most heatedly attacked.”

“The first sentence set the tone: ‘The battle to feed all of humanity is over.’”

“And humanity had lost. In the 1970s, the book promised, hundreds of millions of people are going to starve to death.”

“No matter what people do, nothing can prevent a substantial increase in the world death rate.”

Ehrlich’s book argued that many of the day’s most alarming events had a single, underlying cause: “Too many people, packed into too-tight spaces, taking too much from the earth. Unless humanity cut down its numbers—soon—all of us would face ‘mass starvation’ on ‘a dying planet.’”

That was 1968, but as recently as 1998 I wrote an article I was quite proud of at the time called, “The Liberal Lie: Overpopulation.”  I researched that article probably more than any other I ever wrote. I had so many facts and statistics to prove my point that the supposed threat of overpopulation was not a serious threat at all.

One of the statistics taken from my 1998 article:

“There are approximately 52.2 million square miles of land in the world, not including Antartica. In 1997, the world’s populations  totals were listed as 5.9 billion. By allowing 3.5 square feet per person,  all the people in the world could be brought together in the city of Jacksonville, Florida. While everyone would be cramped in Jacksonville it would be possible to allot each individual person 1,000 square feet (4,000 square feet of living space for a family of 4) and still fit the entire world’s population in the states of Nebraska, Kansas, and South Dakota, leaving the rest of the United States, plus Canada, Mexico, Central and South America, Europe, Africa, Asia, and the Australian South Pacific areas completely uninhabited by man.”

That was 1998. The problem now (only 23 years later) is quite the opposite! The liberal lie about the threat of overpopulation that scared the masses into lowering the birth rate has caused a very real problem now, written about in the latest issue of “Newsmax” magazine called, “America Needs More Babies.”

“The number of babies born in the U.S. last year was the lowest in more than 40 years, according to the figures released in May (2921) by the Centers for Disease Control and Prevention.”

The average number of babies an American woman will have over her lifetime just fell to 1.64, which is the lowest number on record since the government started tracking that particular statistic in the 1930s!

Author Jay O’Callaghan tells us what the consequences are of this trend if it continues:

Some might say it is all a result of the Covid-19 pandemic, but not so says “Newsmax.” They say birth rates never recovered after the last Great Recession.

“Newsmax” goes on to say, “A recent report in Utah’s Deseret News speculated America is in danger of becoming an inverted pyramid, where old people outnumber working-age people, who outnumber children.”

“This would pressure that smaller base of adults expected to work and create new businesses, and pay taxes and spend — activities that keep a society from stagnating, the newspaper said.”

“Plus, they’d be juggling to meet the needs of their elders and children, too.”

I find it almost humorous that two of the biggest perceived threats to mankind in my lifetime have absolutely done a 180. When I was a kid we were supposed to worry about a returning Ice Age and now it is “Global Warming!”  Back then it was overpopulation and now it has reversed to a crisis of not enough babies being born!

I never fell for the liberal lie of overpopulation, but the current threat of not enough babies is very real!

“A breakdown of the consequences of lower birth rates begins with the two 800–pound gorillas in the room: Social Security and Medicare.”

Newsmax says as a result of women in America not having enough babies the following will result:

“ The CDC says if American women continue to give birth at existing rates, they’ll have 1.78 children over their childbearing years, which is nearly half of the 3.58 kids that young moms were rearing in the 1950s.”

The 1.78 to 1.84 fertility rate (depending on which study you quote) is far below what scientists tell us is necessary just to maintain its present level, which is 2.1. In other words, families in the U.S. are (on average) having less than 2 children now and it takes an average of slightly over 2 babies per family just to maintain our present population.

But the United States is doing better than a lot of other countries— 19 others to be exact.

China’s one child policy has even caused them problems so severe that though they currently have a population roughly 4 times the size of the U.S. it could end up with fewer people than America as soon as the end of this century!

China forced women to abort babies for many years. Now the results of this horrific practice are coming home to roost.

The Wall Street Journal reports: “China is careening toward a demographic time bomb. In another decade, it will have more people over 60 than the entire population of the U.S. Its workforce is shrinking, and not enough babies are being born.”

“China’s workforce is shrinking and the population is rapidly aging. By 2050, there will be 1.3 workers for each retiree, according to official estimates, compared with 2.8 now.”

Even sadder than the forced abortions in China are the violent deaths of over 62 million babies in the United States since Roe V Wade in 1973 by free “CHOICE.” What a travesty, that we face a literal crisis of not enough babies being born and we have already murdered over 62 million babies in the womb, and continue to do so at a rate of more than 2,300 every single day.

To our national shame, according to the United Nations’ 2013 report, only 9 countries in the whole world have a higher reported abortion rate than the U.S. They are: Bulgaria, Cuba, Estonia, Georgia, Kazakhstan, Romania, Russia, Sweden, and Ukraine. May Gods have mercy on us.