Separation of Church and State the Most Misunderstood Phrase 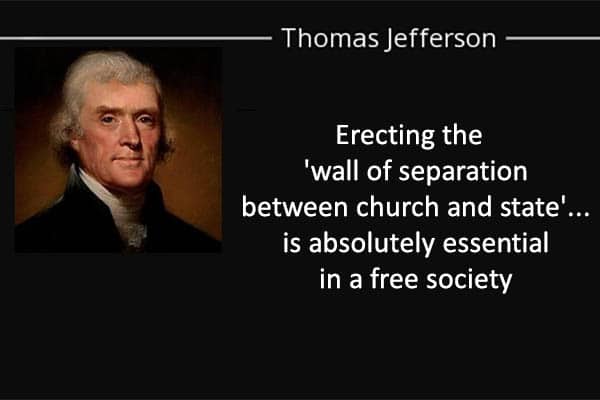 Some law schools teach that the first amendment contains the phrase, “separation of church and state.” One U.S. Representative, a law school graduate and accomplished attorney, admitted in an interview with David Barton that he was taught “separation” in law school as if it were in the constitution. He also admitted that he had never actually read the Constitution for himself. He said that it had never been required of him!

Most people, sadly, haven’t read the Constitution. People like to think that our elected officials who are responsible for making our laws and who have sworn to uphold the constitution have, however.

It is evidently clear with a very little bit of study what was meant by the phrase, “separation of church and state,” and where it came from. The founding fathers of our nation were wary of a national religion such as the Church of England. They did not want to establish one denomination above another as the national religion of America.

The actual phrase, “separation of church and state,” comes, not from our Constitution, but from a letter penned by Thomas Jefferson while he was president. The letter was written to the Danbury (Connecticut) Baptists. The Danbury Baptists were worried about a rumor that Congregationalism was going to be made the national religion in America. Jefferson responded to them with a letter. In the letter he explained that, while we as Americans would always hold to the precepts and values of religion in government, no one denomination would take preeminence over another. It was in this context that he used the phrase, “separation of church and state.”

“Congress shall make no law respecting an establishment of religion, or prohibiting the free exercise thereof; or abridging the freedom of speech, or the press…” This final wording we now have was agreed to by the House and Senate on December 15, 1791.

It is clear from the previous versions what was the intent of the first amendment as it pertained to religion. In January of 1801 the same Fisher Ames wrote an article for a national magazine expressing concern that someday the Bible might be removed from American schools. Ames wrote that the Bible should be kept as the first and foremost textbook in American schools.

Founding father and signer of the Declaration of Independence, Benjamin Rush, was a leading educator in his day. In 1791 Rush wrote a treatise containing 12 reasons why the Bible should never be taken out of American schools. Rush warned that if that were ever to happen there would be an explosion of crime in America. He said that our money would all go toward fighting crime because the only thing that could prevent crime (the Bible) was removed.

Noah Webster, founding father and educator was the author of a history textbook used in American schools for many years. In this text Webster said that all vice and crime proceed from despising or neglecting the precepts found in the Bible.

Many of our founding fathers spoke specifically and fondly of religion as it pertains to government. Many were contributing members of the American Bible and Tract Society.

John Adams said, “We have no government armed with power which is capable of contending with human passion unbridled by morality and religion. Our Constitution was made only for a moral and religious people. It is wholly inadequate to the government of any other.”

For 170 years the U.S. Supreme Court understood the clear meaning of the words, “separation of church and state,” found in Jefferson’s letter to the Danbury Baptists. For example, an 1878 morality issue case, George Reynolds v. the United States, reached the Supreme Court. The Court quoted Jefferson’s entire letter in deciding the case.

On June 25, 1962 in Engel v. Vitale, the United States Supreme Court made a landmark decision. They quoted Jefferson’s words regarding the separation of church and state out of context. That set us on a new course in America. The 10 Commandments, the Bible, and prayer were systematically ruled out of our schools by subsequent Supreme Court decisions based on Engel v. Vitale.

What we have in America today is exactly what Benjamin Rush warned us about in 1791: an explosion of crime. Our only hope is to elect candidates who hold firmly to the same values held dear by our founding fathers.

For more info write to:

What is the Point of Going to Church? Death and Taxes at Least Death Never Gets Worse