Death and Taxes at Least Death Never Gets Worse 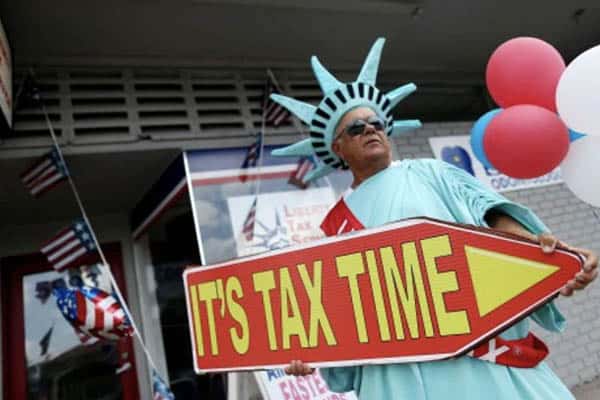 April 15th (or this year April 18th) —the most dreaded day in America. Not everyone, including me, hate paying taxes so much. After all we need roads, bridges, a military and other things only our tax dollars can provide. Some people hate paying taxes period. Some of us don’t, but I don’t know a single soul who enjoys preparing their taxes.

I remember my father and mother in law at tax time. They usually got along pretty well. About a month before April 15th they set up a card table in the living room with a couple of folding chairs. They got out the cardboard box full of receipts for everything they spent all year that had been hiding in a closet.

Mom and Dad literally threw every receipt for an entire year into a big cardboard box, not to be taken out of the closet or even looked at until tax preparation time and the dreaded takeover of the living room by the card table, folding chairs, a calculator,  pens and pencils.

During the dreaded tax prep weeks everything else in the Walters household came to a screeching halt and marathon sessions from early morning until late in the evening of trying to figure out what all those receipts in that box had to do with form 1040. Two usually normal loving parents became ranting raving crazy people for about one month each year from about mid March until mid April.

Mom and Dad were tenant farmers and literally had to save all those stupid receipts to try and come up with as many legitimate deductions as possible so their meager income wasn’t totally eaten up with taxes. It was so stressful it is a wonder one of them didn’t totally lose it and do something crazy or end up in divorce court.

Our taxes when we were brokerage agents for a trucking company were much like Mom and Dad’s farm, but we had computers and Quicken that made it somewhat easier to deal with and we were able to afford to pay $500 each year for a CPA to figure ours. It was still terribly stressful each year though.

There was also the dread fear of getting audited. Not that we were not honest or tried to cheat Uncle Sam, but if you get audited you are not innocent until proven guilty. You are guilty until proven innocent. We know.

When Obama waged his war against Tea Party leaders we got audited for the first and only time ever. I was a founder, leader and speaker of the local Knox County Tea Party. It was a nightmare. If you have never been audited by the IRS you can not imagine the incredible stress it puts you under! It was horrible. I wouldn’t wish that on our worst enemy.

The hours we spent proving every expense and deduction were in the hundreds while we both tried to keep up our real jobs. My wife is so organized that when we were called into give an account she had all our many files color coded, sorted by date, and category. Everything he asked for she could just grab and hand to him.

The ridiculous hours we spent preparing paid off. They only found one small mistake our CPA made which didn’t amount to a hill of beans and we wrote the IRS out a check and that was that. I think the auditor was quite impressed by my wife’s organizational skills and quickly realized she had everything he could ever hope to ask for at her fingertips and he just finally gave up trying to skin us.

I hate to think what would have happened to Mom and Dad if they had ever been audited! Let’s just say that they weren’t as organized as their daughter and leave it at that. They were honest to a fault and tried their best to pay what they owed but only what they owed.

We just did our taxes today (April 18) as I write this. Yes, we put it off until the last minute again. It was awful. Even with Turbo Tax and my wife’s organizational skills we still don’t know if we really should owe some $800 to the Fed and over $300 to Arizona! We are retired folks on a meager fixed income and we did have taxes withheld that should have kept us from owing over $1000!

I love my country. I hate the IRS. I hate our tax system.

When our oldest grandson was a toddler in Korea we went with him to an ear doctor to get treated for an infection. He kept crying and screaming a word/phrase over and over in Korean that we didn’t understand so we asked our son. What was he was saying. It was: (SHEERA)

“It is both possible, and moral, to love one’s country and hate its government.” ~ Dr. Walter E. Williams