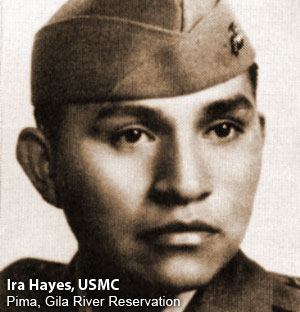 I have always been fascinated by the story of Ira Hayes. If my wife would have let me I even wanted to name our firstborn Ira! I love studying the lives of interesting Arizona natives and Ira Hayes is one of my all time favorites.

Ever since Johnny Cash sang a ballad about Ira Hayes in 1964, when I was only 6 years old, Ira Hayes has been one of my heroes.  My dad bought a new 1967 Thunderbird and we used to sit in the driveway and listen to 8 track tapes, one of which was the Johnny Cash tape with the song about Ira Hayes.

Ira Hayes was a Pima Indian born in Sacaton, Arizona, in the Gila River Indian Communitywithin the Phoenix Metropolitan Area in Pinal and (our own) Maricopa counties. He was the eldest of six children born to Nancy Hamilton and Joseph Hayes.

“The Hayes children attended grade school in Sacaton and high school at the Phoenix Indian School in Phoenix, Arizona. Hayes confided to his classmate Eleanor Pasquale after the Japanese attack on Pearl Harbor, that he was determined to serve in the United States Marine Corps. Pasquale said, ‘Every morning in school, [the students] would get a report on World War II. We would sing the anthems of the Army, Marines, and the Navy.’ Hayes completed two years at the Phoenix Indian School and served in the Civilian Conservation Corps in May and June 1942. He worked as a carpenter before enlisting in the service.” ~ Wikipedia

Ira Hayes enlisted in the Marine Corps On August 26th, 1942 and become a Paramarine. (Paramarines were an elite group of highly trained air jumpers from high altitudes with parachutes.)

Hayes is best known as one of the six flag raisers immortalized in the iconic photograph Raising the Flag on Iwo Jima by photographer Joe Rosenthal.

wounded. It had been one of the bloodiest battles in Marine Corps history. Ira was one of 250 marines who took Iwo Jima hill and to quote Johnny Cash:

But only twenty-seven lived to walk back down again

And when the fight was over, And when Old Glory raised

Among the men who held it high was the Indian, Ira Hayes”

“Hayes was commemorated in art and film, before and after his death. In 1949, he portrayed himself raising the flag in the movie, Sands of Iwo Jima, starring John Wayne. He was the subject of an article by journalist William Bradford Huie, which was adapted for the feature film The Outsider (1961), starring Tony Curtis as Hayes. The movie inspired songwriter Peter La Farge to write “The Ballad of Ira Hayes,” which became popular nationwide in 1964 after being recorded by Johnny Cash. In 2006, Hayes was portrayed by Adam Beach in the World War II movie Flags of Our Fathers, directed by Clint 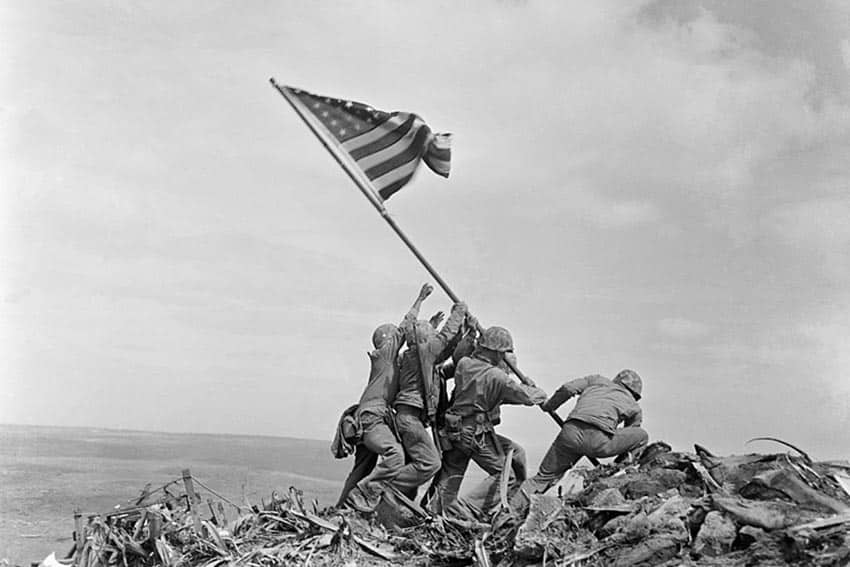 There was a side story to the photo that brought Ira Hayes fame. One of the men was misidentified and that bothered Ira greatly.

Hayes said that the man identified as Sgt. Hansen at the base of the flagstaff in the photo was not Hansen, but was actually Cpl. Harlon Block.

“Hayes seemed to be disturbed that Harlon Block was still being misrepresented publicly as ‘Hank’ Hansen. In May 1946, Hayes walked and hitchhiked 1,300 miles from the Gila River Indian Community in Arizona to Edward Frederick Block, Sr.’s farm in Weslaco, Texas, to reveal the truth to Block’s parents about their son Harlon being in Rosenthal’s flag raising photograph. He was instrumental in having the mistaken second flag-raiser controversy resolved by the Marine Corps in January 1947. Block’s family, especially his mother, was grateful to Hayes. She said that she had known from the time she first saw the famous picture in the newspaper that it was her son in the photo. Mrs. Block wrote Hayes about her son and he wrote her back in July 1946. She then contacted Texas Congressman Milton Westabout Hayes’ letter which started a Marine Corps investigation in December.”  ~ Wikipedia

Without Ira Hayes walking and hitchhiking those 1300 miles the truth of who was really in that famous photo would have probably never been known.

After the war: “Hayes held a variety of jobs, including being a chauffeur to Elizabeth Martin, former wife of Dean Martin, where he lived in her Beverly Hills home for several months but couldn’t stop drinking.  Referring to his alcoholism, he once said: ‘I was sick. I guess I was about to crack up thinking about all my good buddies. They were better men than me and they’re not coming back. Much less back to the White House, like me.’ Hayes was sober while attending the Marine Corps War Memorial dedication on November 10, 1954. Hayes met President Dwight D. Eisenhower who lauded him as a hero. A reporter there approached Hayes and asked him, ‘How do you like the pomp and circumstance’ Hayes hung his head and said, ‘I don’t.’” ~ Wikipedia

Ira Hayes was proud of his service in the war with the Marines, but never wanted the attention he was given after the flag raising picture brought him fame. He suffered from PTSD and  became an alcoholic and died young of exposure and alcohol poisoning on January 24, 1955, at the age of only 32 and is buried with full honors in Arlington National Cemetery. 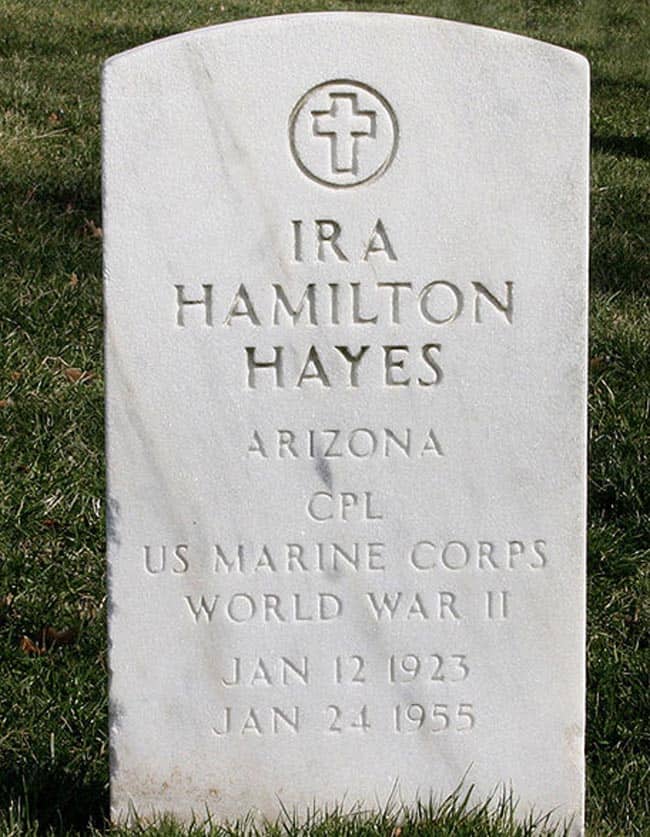 It is such a shame that so little was known about PTSD in those days and that Ira Hayes never got the help he needed.

Thank you for your service Marine. Salute!