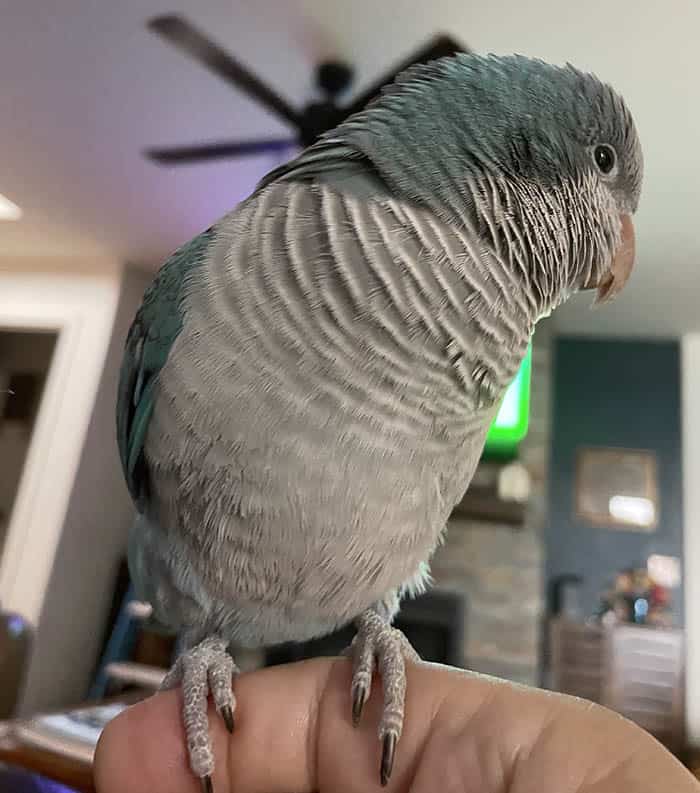 When it comes to pets most folks probably think of dogs or cats. We have had plenty of both, but the most entertaining pet we have ever had is a blue quaker parrot.

Quaker Parrots get their name from the shaking or quaking they do when they are babies. They come in various colors; green, blue, white, yellow, & gray.

Quaker Parrots are against the law to own in several states, but not in Arizona. The reason some states outlaw them is that they are super hearty and multiply quickly in the wild. They can overwhelm other species of birds and eat a lot of fruit and grain.

Quakers can survive temperatures from tropical to sub zero winters!

Bigger than a robin, but smaller than a pigeon, Quakers don’t need a huge cage like some of the bigger parrots. They require very little care. They can even be potty trained. Quakers can live over 30 years!

In the wild Quakers build elaborate nests, the only parrot that does. Some will even build in captivity in their cage if provided with sticks. They will even build connecting nests almost like condos!

Fresh food and water every day or even other every other day, even every three or four days and they are just fine.

Parakeets pretty much just mimic human speech and have very little concept of what they are saying. Quakers have the intelligence of a small child and understand context.

When we get ready to leave the house we tell Harley we are leaving sometimes and he tells us “bye bye.” If we start gathering up stuff, keys, wallets, purse, and especially if we put on a jacket, he goes into his cage and tells us bye bye.

Quakers do not cost thousands of dollars like bigger parrots. They are several hundred dollars, but IMHO worth every cent!

Pound for pound, ounce for ounce, & dollar for dollar Quakers are so much more fun to own for the price than any other pet.

Quakers tend to bond to one person and can even be jealous! My boy is very jealous of my wife when I show her affection! He wants all of my attention.

There is a huge controversy among Quaker owners whether to clip or not clip their wings. It is not painful to them at all to be clipped any more than us trimming our finger nails.

Some owners think it is horrible for anyone to clip a bird’s wings and limit their flight—until they get out and fly away that is! That happens a lot. Someone in my Quaker Parrot owners group on Facebook is always crying the blues because their unclipped pet flew away!

If clipped properly, which anyone can do with a simple pair of scissors, the bird can still fly, just not very high or very far, so if they get loose it is’t hard to corral them back. Our boy can fly just fine for short distances but loses altitude as he goes until he floats gently to the ground.

Quakers can bite and often do and it can be painful to a small child, but they rarely draw blood. If people they don’t want to touch them leave them alone they will not ever attack. They will only nip to defend themselves.

Harley D is such a member of the family we say we have three sons and one daughter. Three of our kids are human and one is a parrot. Our grandkids call our Quaker Uncle Harley. He is so much fun and so entertaining. Our lives are so much richer for having him. We love our little Harley D.

The 2nd Prettiest Drive in AZ Locust Plagues in Arizona?