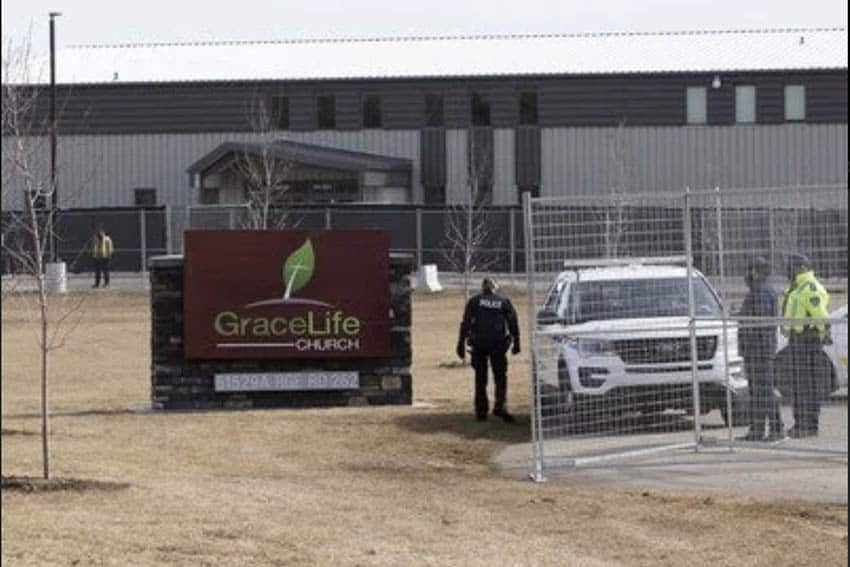 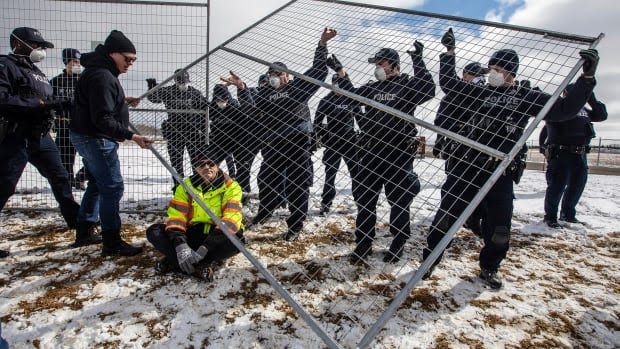 According to the “Edmonton Journal”, “The government of Alberta triple-fenced the church in and locked it so people couldn’t go there. This is a first for the western world to have the government lockout believers from church and that after imprisoning James Coates … in a maximum-security prison. They led him away in chains.”

Pastor Coates was released from a maximum security prison on March 22nd and led Easter Services in defiance of the powers that be in Edmonton.

“The church’s shuttering came after it held two packed services over the Easter weekend in violation of a closure order issued in January for previously flouting COVID-19 restrictions. Coates, who has led several services in recent months, was ticketed in December and then jailed in February for 35 days after refusing to follow court orders.”

Armed RCMP (Royal Canadian Mounted Police) were on the scene as a company called Paladin erected the triple fences and black mesh around the church!

“Grace Life Church has no control of our Church or grounds at this time,” said the Justice Centre for Constitutional Freedoms in a statement. “The Church grounds are fully under the responsibility and control of the RCMP and Alberta Health Services. The closing of the Grace Life facility has understandably resulted in significant public outrage and caused even larger crowds to gather in one place. Albertans have a constitutional right to assemble, associate, and worship.”

The church under siege by the Canadian Gestapo had held services for 37 Sundays in a row without a single Covid case let alone a breakout!

Pastor Coates said, “Costco is packed. People are unafraid to gather en masse in stores! If you are waiting for the government to hand you back your civil liberties that is not going to happen.”

The official Grace Life Church website says, “At one time, a pandemic was defined as an infectious disease that resulted in a certain percentage of excess deaths over and above normal annual averages. The definition was changed in connection with H1N1 to remove this threshold. Ten years ago, COVID-19 would not have qualified as a pandemic. In fact, not even close.”

“Having engaged in an immense amount of research, interacting with both doctors and frontline healthcare workers, it is apparent that the negative effects of the government lockdown measures on society far surpass the effects of COVID-19. The science being used to justify lockdown measures is both suspect and selective. In fact, there is no empirical evidence that lockdowns are effective in mitigating the spread of the virus. We are gravely concerned that COVID-19 is being used to fundamentally alter society and strip us all of our civil liberties. By the time the so-called ‘pandemic’ is over, if it is ever permitted to be over, Albertans will be utterly reliant on government, instead of free, prosperous, and independent.”

“Our local church is clear evidence that governmental lockdowns are unnecessary. In fact, it is also evidence of how harmful they are. Without going into detail, we recently lost the life of one of our precious congregants who was denied necessary health care due to government lockdown measures.”

While it is true that Covid can be a killer flu there is a big difference between dying “from”COVID and dying “with” COVID and many who have been listed as having died from Covid had co-morbidities and would have likely died anyway.

The average age of those who have died related to COVID-19 is 82, consistent with life expectancy in Alberta!

“What do we believe people should do? We believe they should responsibly return to their lives. Churches should open, businesses should open, families and friends should come together around meals, and people should begin to exercise their civil liberties again. Otherwise we may not get them back. In fact, some say we are on the cusp of reaching the point of no return. Protect the vulnerable, exercise reasonable precautions, but begin to live your lives again.”

It is time to protest such atrocities and that is exactly what is happening outside the triple fenced in armed guarded church. According to CTV News, “Hundreds of people were seen singing hymns, chanting, and gathering outside the fenced-off GraceLife Church west of Edmonton on Sunday.”

Pastor Coates has continued to hold services at an undisclosed location in defiance of the government and in obedience to His Lord and Savior, Jesus Christ, and will continue to do so until the laws are changed or he is imprisoned again.

Coates told his congregation, “It’s amazing to have an underground church in Canada.” It is not only amazing, it is amazingly sad and disturbing, I would add.

To support Grace Life Church and Pastor James Coates during this tyrannical siege of government oppression go to: https://gracelife.ca/give/