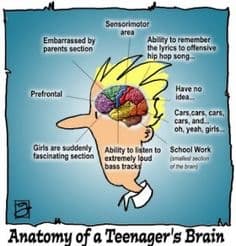 Scientists used to think that the teenage brain more closely resembled the adult brain than a child’s brain. Recent studies have indicated that isn’t the case.

Adults have often been amazed at how teens can seem to be happy-go-lucky, well-adjusted, seemingly-normal people one minute and ranting, raving lunatics who are impossible to understand the next.

The single most frustrating thing to parents of teens is the fact that they can run so hot and cold. One minute they love you and the next they hate you. The reason for this seems hidden deep inside the teenage brain.

Since the inception of the M.R.I. (magnetic resonance imaging) scientists have been able to study the human brain in ways never thought possible before. Adults and teens wired for study purposes are given certain stimuli and certain regions of the brain light up with activity. What puzzled researchers at first was that adult brains light up in both the prefrontal cortex and the limbic regions almost simultaneously. Teen brains only light the limbic region and the prefrontal cortex region stays dark.

The problem with the fact that teen prefrontal cortex regions of the brain show practically no activity is that the prefrontal cortex is like the CEO of the brain. The limbic region is the seat of the emotions. It is no wonder teens are so ruled by emotions and seem to be so illogical. The part of the brain that will later balance the emotions with reason and common sense is sadly asleep at the wheel until long after puberty.

The limbic region, found deep within the brain, is the source of raw emotions such as anger. Unfortunately, the limbic region goes into hyperdevelopment mode during the teen years. The raw emotions are tempered in adult brains by signals from the prefrontal cortex. According to Karl Pribriam, director of the Center for Brain Research and Informational Sciences at Radford University in Virginia, “the prefrontal cortex is in charge of `executive functions.’ These include the brain’s ability to handle ambiguous information and make decisions, to coordinate signals in different regions of the brain, and to tamp down or prolong emotions generated in the limbic system.”

“In an adult, for instance, an overheard insult might arouse a murderous rage, until the prefrontal cortex figures out that the comment was meant for somebody else and tells the limbic system to pipe down.”

“The teenage tendency to leap before looking is compounded by the fact that adolescence is a time for seeking out new experiences, including some that are dangerous…Driving without a seatbelt, getting tattooed, smoking cigarettes, shoplifting-the list of foolish things kids do is longer than most parents really want to know.” (Shannon Brownlee; Roberta Hotinski for

The good news for parents seems to be that the vast majority of kids will make it through adolescence with few permanent scars, except for the occasional hole through a belly button. New research shows that most children emerge from adolescence physically and emotionally intact-although their parents will probably never be the same.

It probably won’t help parents to tell their teenagers that we know their brains are a work in progress. It might help parents to realize that teen brains are incapable of processing information the same way adult brains do. So next time your teen looks at you in that certain way only a teenager can, just look back at them and smile, realizing full well that his/her brain is only half there for a few more years.