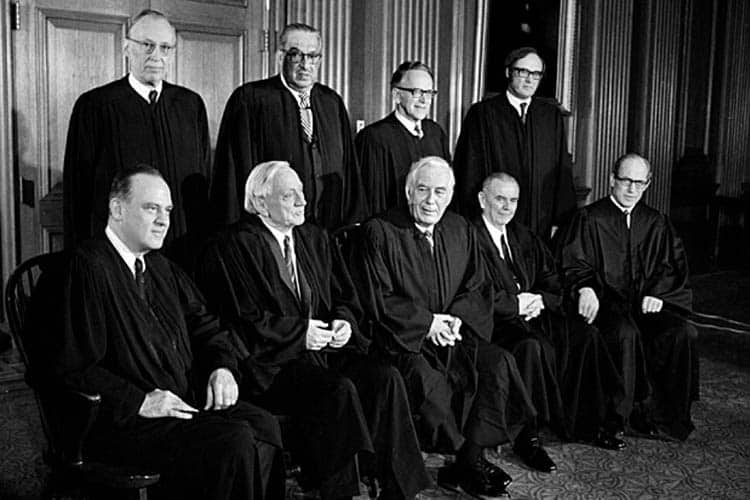 Have you ever had someone say to you, “That may be right for you but that doesn’t mean it’s right for me.” Sure you have. That’s moral relativism. That’s the spirit of this age. It came from the 1960’s.

The problem is this, the engines don’t work and the boilers aren’t working. You say, “How is it working?” It’s moving off the momentum of the past. America is living off the spiritual capital of the past, it’s coming to a halt, our visa cards have reached their limit and God is going to bring judgment on this nation.

In 1857 slavery was the moral issue. The Supreme Court in the Dread Scott decision had decided and ruled that black people were not human beings. That’s what the Supreme Court said. They said black people are just like a chair or table-they’re just things. You can sell them; you can move them around; you can split them up. That’s not what the Bible says, but that’s what the Supreme Court said. (Thankfully that horrible decision was overturned after the Civil War, by passing the 13th Amendment and 14th Amendments in 1865.)

Once again the Supreme Court has said a certain segment of our population are not human beings. God says that’s not a fetus, God says that’s a baby. That’s what God says, that’s what the Bible says. And I want to tell you something else, any political leader that supports partial birth abortion, where you take a full term baby, jam scissors in the back of their head, put a catheter in there and suck their brains out, don’t you tell me you’re a Christian. That’s a stench in the nostrils of a Holy God.

The beginning of the decline in America was the SCOTUS decision of “Engel v. Vitale” in 1962. This decision eliminated school prayer. As we saw, that decision cascaded into a number of other decisions that have made government hostile toward religion.

“Roe v. Wade” in 1973 was the worst decision in the history of the Supreme Court up to that time. God’s special love in His concern for the well-being of the children is well documented throughout Scripture. In fact, Jesus warned of the fate of those who would dare harm a child. In Matthew 18:6 Jesus said, “Whoever causes one of these little ones who believe in Me to stumble, it would be better for him to have a heavy millstone hung around his neck, and to be drowned in the depth of the sea.”

It looked like it couldn’t get any worse in the decline of America in her rebellion against God and then in 2015 Obergefell v. Hodges redefined marriage as being something other than between a man and a woman.

The horrible Dred Scott decision was eventually overturned and there was a revival in America back in the 1850s. Repentance for our national sins of abortion and redefining marriage and a national revival is the only hope for America today.

Ruth (Mrs. Billy) Graham once famously said, “If God doesn’t punish America, He’ll have to apologize to Sodom and Gomorrah.”

Our “ship” may still look like all is well, but it has a death rattle unless we repent and turn our hearts back to God and His Holy Word. Let us pray that America would yet turn back to God and that God will have mercy on us one more time before it is too late.

(I would like to credit Dr. Steve Farrar for the lion’s share of this article taken from a sermon he gave to Promise Keepers I attended in Indianapolis, Indiana, back in 1999.)

Throw Them To The Lions A Look Into the Teenage Brain