The Biggest Reason to be a Gun Owner 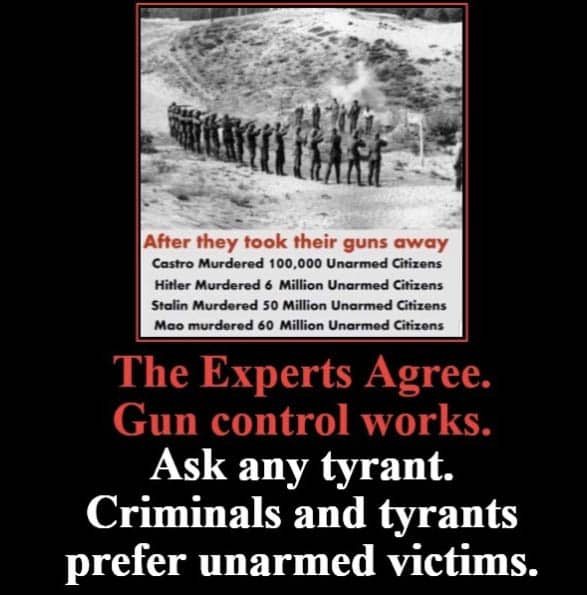 I grew up on a one-hundred-acre farm with 70 acres of timber and only 30 tillable. We always had guns on the farm. We hunted on the timberland and so did a lot of our friends from town. I got my first shotgun when I was a young boy, but it wasn’t until I saw the information I am about to share with you that I became convinced of the importance of the Second Amendment.

The Jews for the Preservation of Firearms Ownership group chronicles the relationship between gun restriction, confiscation and the genocide that has taken place around the world. Here is the record. It speaks for itself.

*The Soviet Union established gun control in 1929. From 1929 to 1953, 20 million political dissidents, unable to defend themselves, were rounded up and exterminated.

*Turkey established gun control in 1911. From 1915 to 1917 one and a half million Armenians, unable to defend themselves, were rounded up and exterminated.

*China established gun control in 1935. From 1948 to 1976 twenty million Anti-Communists, Christians, political dissidents and pro-reform groups, unable to defend themselves, were rounded up and exterminated.

*Germany established gun control in 1938. From 1939 to 1945 13 million Jews, Gypsies, mentally ill people and other “mongrelized peoples,” unable to defend themselves, were rounded up and exterminated.

*Cambodia established gun control in 1956. From 1975 to 1977 1 million “educated people,” unable to defend themselves, were rounded up and executed.

If you add up the numbers, that amounts to more than 55 million innocent people who have been slaughtered by their own governments. The first step was always the same–rendering citizens defenseless by restricting or confiscating their firearms.

An armed citizenry is the only force that insures freedom. It isn’t the militias that can insure freedom. It is simply the fact that if nearly every home owner is also a gun owner there isn’t an army in the world big or strong enough to take the freedom of an armed populace like that, and tyrants know it.

Listen to Adolf Hitler: “The most foolish mistake we could possibly make would be to allow the subject races to possess arms. History shows that all conquerors who have allowed the subject races to carry arms have prepared their own downfall by so doing. Indeed, I would go so far as to say that the supply of arms to the underdogs is a sine qua non for the overthrow of any sovereignty.” (Adolf Hitler H.R. Trevor-Roper, Hitler’s Table Talks 1941-1944 London: Widenfeld and Nicolson, 1953, p. 425-426)

Even Mahatma Gandhi agreed that an armed citizenry is of extreme importance. “Among the many misdeeds of the British rule in India, history will look upon the act of depriving a whole nation of arms, as the blackest.” (Mahatma Gandhi, “Gandhi, An Autobiography”, M. K. Gandhi, page 446)

The purpose of owning a gun is not to be a part of a militia, wear camouflage, and play soldier. The hope is that as long as we enjoy an armed citizenry we will never have to use those guns for anything other than sport. I would rather own guns and never need them than to not own one and wish I had.

To close look what even Jesus Christ Himself said: “When a strong man armed keepeth his palace, his goods are in peace.” (Jesus Christ, Luke 11:21-22 King James Version) He also said if his disciples didn’t own a sword they better sell their clothes and go buy one. (Luke 22:36)

A Look Into the Teenage Brain Resurrection