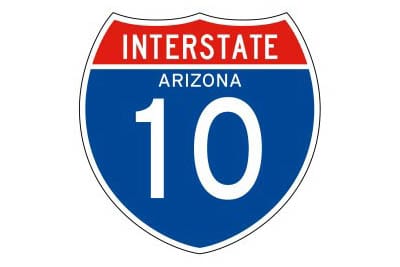 In 1919, a young Army Lieutenant Colonel named Dwight D. Eisenhower took part in the Motor Transport Corps convoy that drove 3,251 miles between Washington D.C. and Oakland California. The mission was to determine the difficulties that military vehicles would have on a cross-country trip. They left from near the White House on July 7th and followed the Lincoln Highway (old 30). It took them 62 days to complete! They only averaged about 6 miles an hour, or 58 miles a day. Eisenhower never forgot that trip and during WWII he saw the German Autobahn and realized what America needed.

After Eisenhower became president in 1953, he and his administration quickly made it a priority to develop an interstate highway system, eventually resulting in the Federal Aid Highway Act of 1956. We appreciate the system of interstates mainly because we use them for pleasure: to sightsee and to visit our friends and loved ones all around the country easily and efficiently, but The Dwight D. Eisenhower System of Interstate and Defense Highways was largely begun for national security. The threat of nuclear war made it necessary to be able to execute the emergency evacuation of large cities and the quick and efficient movement of troops essential to national defense.

Interstates don’t run in straight lines east and west or north and south in a grid, but generally connect cities of 50,000 or more population.

“Numbers divisible by five are intended to be major arteries among the primary routes, carrying traffic long distances. Primary north–south Interstates increase in number from I-5 between Canada and Mexico along the West Coast to I‑95 between Canada and Miami, Florida along the East Coast. Major west–east arterial Interstates increase in number from I-10 between Santa Monica, California, and Jacksonville, Florida, to I-90 between Seattle, Washington, and Boston, Massachusetts, with two exceptions. There are no I-50 and I-60, as routes with those numbers would likely pass through states that currently have U.S. Highways with the same numbers, which is generally disallowed under highway administration guidelines.” (Wikipedia)

Interstate highways don’t always run the way they are designated for several miles, however. For example, I 74 in Iowa and Illinois runs pretty much straight north and south from the Iowa Quad Cities to Galesburg, IL (over 50 miles) even though 74 is designated an east west highway. It does run generally east and west between Iowa and Cincinnati, Ohio.

A small number of interstate highways (mostly in the Northeast) use sequential-based exit numbering schemes (where each exit is numbered in order starting with 1, without regard for the mile markers on the road). An example is the Pennsylvania Turnpike.

Only one interstate highway, Interstate 19, here in Arizona, is signed with kilometer-based exit numbers! The reason length is measured in kilometers instead of miles here is because, at the time of construction, a push for the United States to change to a metric system of measurement had gained enough traction that it was mistakenly assumed that all highway measurements would eventually be changed to metric! (Thank goodness that didn’t happen)

What was started in 1956 by President Eisenhower was considered complete in August 10, 1990 when the final section of coast-to-coast I-10 (Santa Monica, California, to Jacksonville, Florida) was dedicated as the Papago Freeway Tunnel under downtown Phoenix, Arizona. This portion of I 10 right here in Phoenix was considered the completion of what Eisenhower started.

Most of the interstate system consists of freeways, but about 2,900 miles of toll roads are included in the Interstate Highway System.

“Rural speed limits generally range from 65 to 80 mph. Several portions of various highways such as I-10 and I-20 in rural western Texas, I-80 in Nevada between Fernley and Winnemucca (except around Lovelock) and portions of I-15, I-70, I-80, and I-84 in Utah have a speed limit of 80 mph. Other Interstates in Idaho, Montana, Oklahoma, South Dakota and Wyoming also have the same high speed limits.” (Wikipedia)

Longest (north–south): 1,908 miles: I-95 from the Canadian border near Houlton, Maine, to Miami, Florida.

A little known fact is, though not on a single Interstate highway, but it is almost as far from one end of Florida, from near Pensacola, to the other end of the state at Key West, than across Texas at the widest point on I 10.

If you want to drive slow then please don’t drive in the left lane(s) and hold up traffic.

Though the law says to move over to the left when there are stopped vehicles on the right shoulder, do NOT do so when there are vehicles to your left that you will run off the road!

Don’t drive along next to a semi truck on either side for extended periods of time. Either slow down or speed up to avoid this dangerous activity.

The Most Incredible 29 Miles of Arizona Memorial Day