The Most Incredible 29 Miles of Arizona 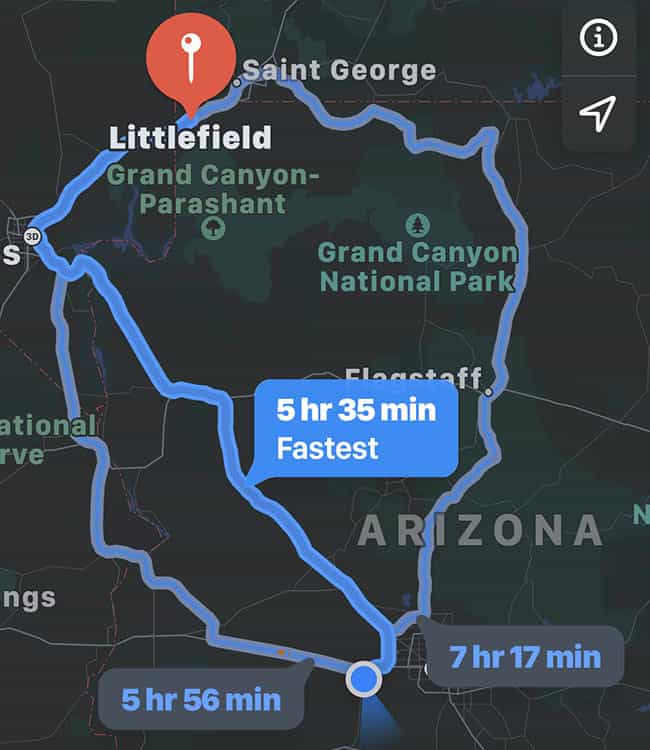 There’s an old C W McCall trucker song that goes:
“Well, I’ve walked the line on 89 in the Arizona sun
I’ve chased the moon and I’ve caught a star on U.S. 101
I’ve seen the sights from the Northern Lights to the bend in the Rio Grande
I’ve took in a lot of this U.S.A ‘Cause I’ve trucked all over this land”
I’ve paid the price of a truckin’ life I’ve trucked all over this land.”

I’ve done that. I’ve seen all lower 48 states and most of the sites along the way in my over the road trucking career, before I went to work as an engineer on the railroad. Of all the states I’ve seen and all the sights, nothing compares IMHO to the 29 miles of I 15 through the Virgin River Gorge here in Arizona, between St. George, UT, and Mesquite, NV.

As Grand as the Grand Canyon is, you can’t drive through the canyon, but you can drive through the Virgin River Gorge and it is something else to see. I can’t wait to go back. The first time my wife saw it she was riding with me in an 18 wheeler and we pulled over to look at the rock ledges on both sides of us, only a few hundred feet away, and had to look straight up to see the sky. She got tears in her eyes as she saw what God had made.

Interstate 15 (I-15) is an Interstate Highway, running from San Diego, California, United States, to the Canada–US border, through Mohave County in northwest Arizona. It is totally isolated from the rest of Arizona, in the remote Arizona Strip, and short in length at just 29.43 miles.

When it opened, (1973) the Virgin River Gorge passage was the most expensive section of rural Interstate per mile ever built.

The new highway enters Arizona running parallel to the old US 91. I 15 parallels the Virgin River for its entire length in Arizona, but the terrain abruptly becomes more breathtaking at mile 13, where the Virgin River Gorge begins.

The first interchange is exit 8 at Littlefield, where old US 91 turns north to avoid the gorge. I-15 crosses the river for the first time just beyond Littlefield

Littlefield, Beaver Dam, and Scenic have the distinction of being the only towns in Arizona along I-15. Owing to its location in the Arizona Strip, northwest of Grand Canyon National Park and west of the Virgin River, it is isolated by hundreds of miles from the rest of the state. To get to any other Arizona towns means driving through either Nevada or Utah, or driving on unpaved roads to the rest of Arizona’s road network.

Beyond exit 9, I-15 enters the Virgin River Gorge, first passing through “The Narrows.” Here, the gorge has limestone cliffs that are as high as 500 feet above the highway. There are several places you can pull off which allow access to these cliffs. Within the canyon a total of five bridges cross the river.

Even before its opening, it was promoted as the most scenic highway in the state of Arizona; according to a 1988 article in “Arizona Highways,” magazine. The Virgin River was rechanneled a total of 12 times at the price of approximately $10 million per mile at the time it was built.

Construction was so costly it actually stopped and was almost abandoned until the state of Utah loaned a portion of their federal highway funds to Arizona to finish it!

There is an old children’s story called, “We’re Goin On A Bear Hunt” that says:

Can’t go over it,

Can’t go under it,

Can’t go around it,

Got to go through it!

That is what I 15 does through the Virgin River Gorge. It is a marvel to behold.

There is a wonderful documentary free on Vimeo called, “My Father’s Highway,” done by the son of the engineer who died trying to complete the project. I highly recommend it.

The Arizona Highway Department, now ADOT, spent more than $48 million, or about $1.63 million per mile, for the four-lane interstate and seven bridges.

It went from a place where a horse couldn’t go to a 4 lane super highway because of the blood sweat and tears of some rugged pioneers.

The 29 miles of I 15 through Arizona cost approximately $100 per inch to build and is a marvel to behold, a must see in my book. Even though you have to drive miles and miles out of the way to get to it from anywhere else in Arizona and must go through either Utah or Nevada to get there, every Arizona resident should make the trip at least once. It is about a 5 1/2 hour trip from Buckeye.